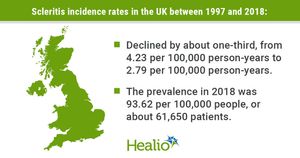 The incidence of scleritis declined by about a third in the United Kingdom between 1997 and 2018, according to data published in Arthritis & Rheumatology.
Researchers further wrote that scleritis had multiple, significant associations with as many as 19 infectious and immune‐mediated inflammatory diseases (I-IMIDs). The strongest of these associations were reported with granulomatosis with polyangiitis, Behçet’s Disease, Sjögren’s syndrome, rheumatoid arthritis, systemic lupus erythematosus, Crohn’s disease and sarcoidosis.
“It has been long-recognized

← VIDEO: Impact of COVID-19 pandemic on a private practice after 1 year, part 4
David R. Guyer, MD to Step Down from Iveric Bio Board to Rejoin Venture Fund →